Most of the early life of El Brendel is shrouded in some mystery. Since his popularity declined in a huge way after 1932, finding interviews with him where he discussed anything but his latest project is impossible. Due to a little prodding from a couple of participants in the excellent “It’ll Take The Snap Out of Your Garters” blog, I will try my best to reconstruct El’s early life as best I can with the materials I have available to me at this time. Hopefully this blog will lift up a rock on the people who have further details on El that up until this time have been unknown to me and want to add their recollections of this wonderful comic.

Elmer Goodfellow Brendel was almost certainly born on March 25, 1891. Although I have yet to uncover an actual listing for his birthdate (pre-1893, birthdates were recorded by local churches and birth certificates were not issued) multiple censuses and death certificate information bear this out. His father, Joseph Brendel was born December 24, 1859 or 1864 in Germany and immigrated to the US in 1865 and was a milk dealer by trade. His mother, Mary E. Goodfellow was born in September of 1864 in Pennsylvania to a German father and PA born mother. Contrary to what has been written elsewhere and copied many times over erroneously, I have found absolutely NO evidence at all that El’s last name was ever “Brendle”. It was always BRENDEL and never changed.

The 1900 census lists the Brendel’s living at 2268 Lambert Street in Philadelphia and at the time they had five children (birthdates provided):

The Brendel’s also had a sixth child, Lizzie Mary Brendel (born 1881) but she died at age 3 ½ years on 31 October 1884. At that time the Brendel’s were living at 215 Susquehanna in Philadelphia. She is buried at the Odd Fellows Cemetery in Philadelphia.

Probably some made up information in his later life, was a quote from an interview in 1954 with Walter Ames where he stated about his youth, “My Mother didn’t want me to have a Swedish accent so she wouldn’t let my grandmother talk the language around the house. Grandma and I would sneak out to the barn and she’d try to teach me there. Only thing I learned was the accent.” It seems highly unlikely that this was a true story but this is the only interview I have where El talks about his youth.

The 1910 Census still lists the Brendel's at the Lambert Street address. His father Joseph was listed as a butter, eggs, and milk merchant. Still living at home were George, Elmer (age 19), and Eva. El’s dad Joseph died August 15th, 1911 of stomach cancer and is buried at the Odd Fellows Cemetery in Philadelphia.

Also in 1911, El gets married for the first time to an Emma Smith (born in Bucks County, PA). This marriage I discovered when I obtained a copy of the license to El’s 2nd marriage to Sophia Florence Rosbert (known professionally as “Flo Bert”). Of course the most important part of the marriage license is not clearly visible in the document provided by the city of Philadelphia, so I have to try to work out the details of the written information of El’s first marriage. It appears that El and Emma were married on June 10th, 1911 and were divorced on January 25th, 1921. Until I can find further information to confirm these dates, this is my best guess, but I will show and scan here and maybe you can decipher the dates. 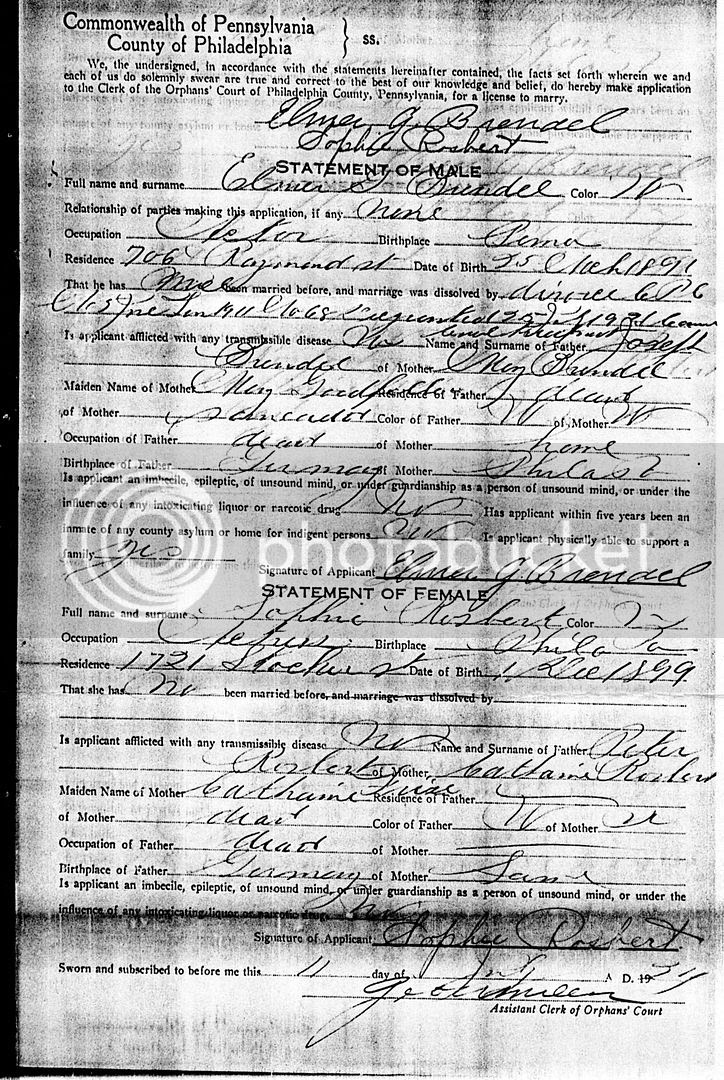 Nearly nothing is known of Emma Smith. Being such a common name, it has been hard to research and find any information of her under her maiden name and even with the last name of Brendel. What is known is that she and El had 2 children, Elmer Norman Brendel born on August 15th, 1912 and Mildred Brendel, born January 9th, 1914. Mildred died on May 18th 1914. At that time El and Emma were living at 2763 North Jackson in Philadelphia. The daughter was buried at the Odd Fellows Cemetery in Philadelphia.

Similar to Emma, not much is known at this time of Elmer Jr. (but we certainly have more info on him than his mother). The first details I have on him is his in 1930 in a census of Merchant Seamen which lists an Elmer Brendel, age "18," born in PA, listed as a deck boy on the "West Eldara" -- a vessel owned by the American Diamond S S Company, in port at Hoboken, NJ and he had signed up on that ship on March 25th, 1930. We know this is Elmer Jr. because he lists the address of his next of kin as 1175 South Harcourt, Los Angeles, where El and Flo were living at the time.

Elmer Jr. was married to Marjorie A. Stohler, a nurse, on February 28th 1937 in Marysville, Pennsylvania even though they lived in Philadelphia. Junior gave his address as 2413 Opal Street and his occupation was listed as salesman. Emma (Smith) Brendel was listed as living at 31 Ashmead Place. The marriage didn’t last long as in 1942, Marjorie Stohler Brendel married William Matz Wenzel in Santa Rosa, Florida.

Elmer Jr. had some trouble with the law. An article in the Los Angeles Times (on a story originating from Chicago from the 6th) on November 7, 1944 states:

Three worthless check charges against Elmer Norman Brendel, 31, who testified he is the son of El Brendel, film comedian, were dismissed today.

Brendel was held, however, for action on a fugitive warrant alleging a similar offense in Pennsylvania.

Elmer Brendel, 37-year old son of comedian El Brendel, yesterday was sentenced to a year in Riverside County Jail and was placed on probation for two additional years for issuing checks without sufficient funds.

At present he is in the Prison Ward of Riverside County Hospital under medical treatment.

Judge O.K. Morton, in pronouncing the sentence, took cognizance of the fact that Brendel had made good $200 of the $250 in bad checks and that the victim of a $50 check-passing, Mayor Charles Farrell of Palm Springs, had sent a letter to the probation officer asking for leniency for the defendant, who admitted his guilt.

The last information I can find on Elmer Jr. comes from another L.A. Times article on 3-21-62 in regards to bowling:

Elmer Brendel, who managed establishments in the Los Angeles area for years, is now at his familiar post at Ramona Recreation in Hemet.

Elmer Jr. passed away on August 31st, 1963 of a suicide by drug overdose. His death certificate lists the Hemet Bowling Alley Co. as his employer and his last usual address as 1830 North Taft Avenue (El and Flo’s house) 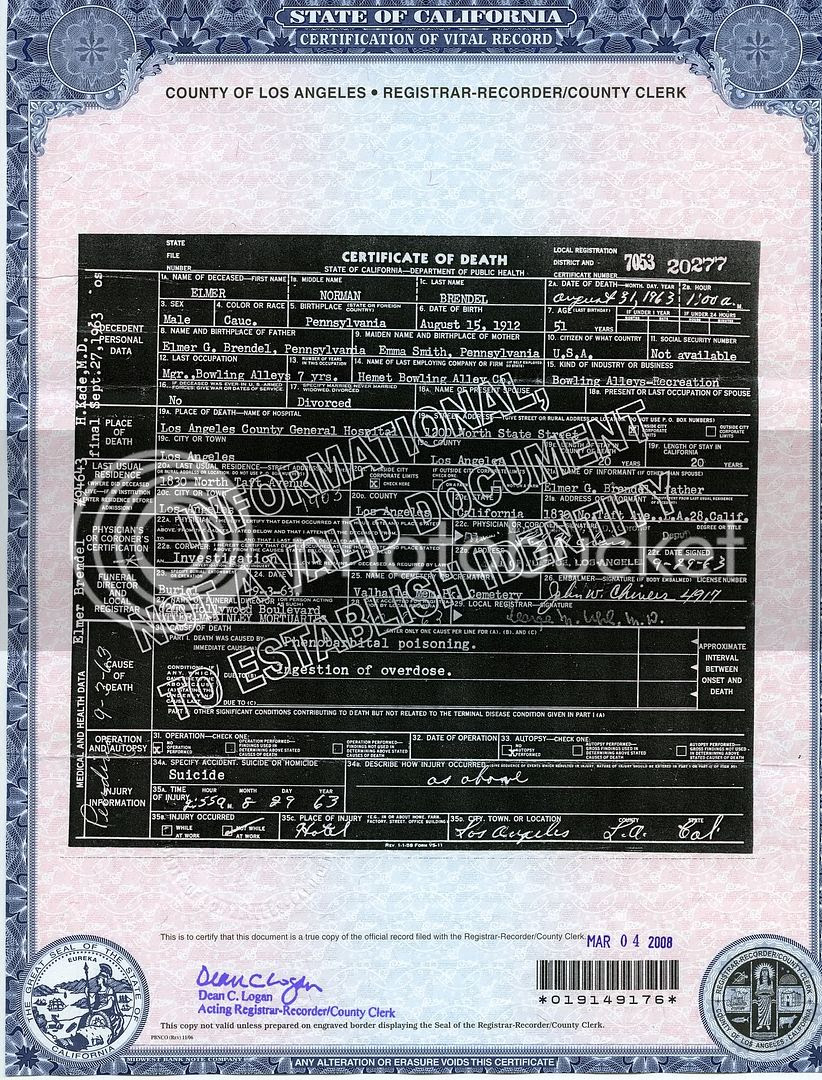 Like many young men in 1917, El registers for the draft and lists his address as 51 North 52nd street in West Philadelphia. He lists his birthdate as March 25th 1892 (not like everywhere else where it’s listed as 1891). His employer is listed as H. Bart McHugh (vaudeville agent) and listed his present trade as “Theater Business”. He also listed he couldn’t fight in the war as he was the sole support of his wife, child, and widowed mother.

That’s all I have on the early life of El Brendel. Of course, if any new information appears, I will post it here. If anyone has any further information they can provide, or know of any relatives who I could contact, please send them my way.

So I'm going to ask you since I can't seem to find the answer anywhere else. The program for "Wings" 1927 erroneously lists El's character's name as Patrick O'Brien. I asked about and Rodney Sauer told me he had sheet music from the premier of "Wings", and the notations on the music are correct, indicating the name Herman and not Patrick O'Brien. Plus, it just wouldn't make sense for the character to be Irish.

Do you have any idea WHY the programs have that error?

I think you asked me before, but I have no idea at all and have not found any document to state the reason. In fact I have a few reviews that don't even mention Brendel at all!

If Rodney has the sheet music that says O'Brien and I have the original program that says O'Brien, you kind of have to ask yourself, where does the print we are seeing today originate from?

There really are 2 I have seen and both happen to be the British Photoplay edition and they have the Herman Schwimpf name in the titles. My theory is that since O'Brien is an Irish name maybe for the British market it was changed to something a little less "offensive" to the people who might be seeing it? And maybe O'Brien was for the US market?

I'm sure in some archive they must have an original opening night program from where it was premiered in the US and that should give you the correct answer, but I believe mine might be the best answer we have.

His sheet music says Herman, actually. Sorry if I was confusing.

Your idea is a good one! Also, I was thinking that maybe the character is named O'Brien in the book the movie is based on? I'll have to look that up.

Back to El, I love how his middle name is his mother's maiden name. He could almost be hyphenated.

Stacia,
Hmmmmmmmmm. I don't know now. I can't figure it out. Are you saying that you have the Photoplay book of "Wings"? I have seen those for sale but never picked one up. The hunt goes on.

Regarding his middle name, I have a friend who doesn't call him "El" or "Brendel" at all. He refers to him as Elmer Goodfellow.

As a lawyer, allow me to make a suggestion: if you know of any lawsuits where Brendel (Sr.) was a plaintiff or a defendant, the published reports might have a bit...but the real gold would be to find any court transcripts or summaries thereof. Tricky, but possible.

I'm going to try to get a photo of 135 Waverly this Friday. It's not far from here and it's a nice neighbourhood. The others -- err -- maybe not so :/ Also, do you know WHICH "Odd Fellows" cemetary El's family is buried in? Again, if it's not in a dodgy area I'll go off with my camera.

EO,
I have some feelers out there for just such information now and will certainly post if I find anything.

Amy-Jeanne,
The hyperlink I posted under the Odd Fellows listing should have the info, but it's right here too:

http://www.cemeteryco.com/history.htm
(look under the heading "Relocations from other grounds")

I assume that this was the only Odd Fellows Cemetary in the city limits but I do not know much about Philadelphia so I could not tell you.

I don't have a program but I've seen them online. One is here on eBay

(sorry the link is so long) and I've confirmed that the name does indeed say Patrick O'Brien.

I figure that explains why Anthony Slide repeated the Patrick O'Brien error in "Eccentric Comedians", he must have used a program for reference. Beyond that, I have no idea.

That is the program I have and it certainly says O'Brien. I'm sure the information will come to light someday, but right now it is hidden.

Happy New Year, El Brendel!! You are still a topic of concern in 2009!

I agree with King - isn't this amazing? So much interest in El to this day, over 80 years after he first appeared in movies.