Best wishes to all the readers of this blog for a super fantastic New Year.  I will do my best to have more posts than I did in 2011 so keep checking back in every once in a while. 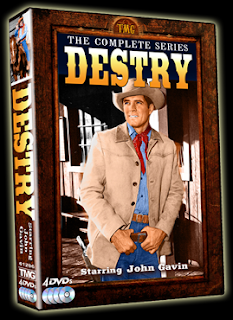 Thanks to the Timeless Media Group (and a HUGE hat tip to reader John Hall for giving me the heads-up!), El Brendel's television appearance on "Destry"  is now out on DVD!  I blogged about El's performance as a barber in the episode "Deputy for A Day" HERE and although I can't give a review of how the quality is, it's nice to have all the episodes of this TV series in one place.

Some screen grabs to refresh your memory:

El in the barber shop

The good people over at the Capitol Theater in Rome, New York recently started a new blog, The Capitol Letter, and they asked me to contribute a guest article for them.  I chose to write about the unreleased 1932 El Brendel film, "Born to Fight".  So head on over to their site and check it out! 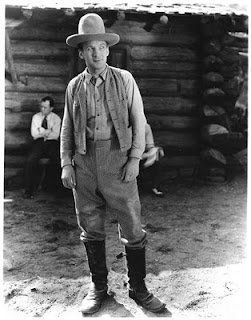 El Brendel in a scene from the unreleased "Born to Fight"
Posted by Louie at 8:23 AM 5 comments:

One of my favorite actresses was born 105 years ago today and what better way to celebrate the life and career of Joan Blondell then a photoblog, right?  HAPPY BIRTHDAY, JOANIE!!

with Helen Twelvetrees and Lilyan Tashman in 1931's "Millie"

on the radio with Warren William

publicity still with Stuart Erwin for "Make Me A Star" (1932)

looking as GREAT as ever!

someone help me, I know I've seen the film before but I'm drawing a blank!

While I wait out hurricane Irene during it's SLOW trip up the Eastern seaboard, I thought what a great diversion would be to have another round of sexy vintage pictures.  This time I have absolutely no idea who these women are so it's up to the readers to clue me in to their identity.  If there were clues on the back of the pictures, I will post then under the images:

Carrie Liz clued us in that this maybe Andrea Leeds.

Conchita Montenegro (in the middle) from the 1931 MGM film, "Never the Twain Shall Meet".
(Hat tip to Rich Finegan!)

El Brendel & I get some press

Yup, word is getting out on our favorite Swede.  Just look at this article in the Syracuse New Times about the upcoming Capitolfest film show this weekend:

I even get a mention!  Don't forget, CAPITOLFEST THIS WEEKEND!  Tickets can still be purchased, even right at the box office on Friday, Saturday, or Sunday, and even on line.  See you there and don't forget to say hello!
Posted by Louie at 11:45 AM 15 comments:

Ah, yes.  Mid-August is nearly upon us and what a perfect time to get away for a little rest before we finally close the door on summer and slip back into winter.  But every year, for the past eight, the Capitol Theater in Rome, New York, has been making that transition MUCH easier by putting on one of the FINEST film festivals you'll ever attend.  From August 12th-14th, come to Rome for a rollicking good time.

By using the tag line, "A vacation, not a marathon", Capitolfest prides itself on a leisurely pace that doesn't leave you drained by the time you say good-bye.  Rather than a four day haul (as most festivals are), Capitolfest is three days. Although this year they've raised the bar a bit by adding about 5 more hours of films on Friday, it's not a schedule that's gonna have me falling asleep on the ride home.

But don't let my description lull you into a state of serenity as Capitolfest offers a most ferocious film line-up.  In fact, out of all the films they are showing this year, I have only seen one of them, BUT only on video and never in a theater.  And that's what this festival is all about, checking out rare films, screened in 35mm, shown with carbon-arc projectors.  Add the 1928 Capitol Theater, and it's like stepping back in time.  So, you can check out the schedule, but here are the films I'm excited about seeing:

I have to say I went a bit crazy when I found out that Janet Gaynor was chosen as the "featured star" for the 2011 festival.  As any reader of this blog knows, I am a HUGE Janet Gaynor fan!  This year, Capitolfest is serving up some rare Gaynor:

The Gaynor goods, get kicked into high gear on Friday at 8:35 by the showing of  the 1926 short "Pep of the Lazy "J".   Gaynor made a few Western shorts for Universal in the mid-'20's and this one has survived.  I don't know if the above still is from that film, but it is almost certainly from her stint at the studio. One I have been waiting to see for a long time.

Immediately following "Pep..." we have the incredible "Sunrise: A Song of Two Humans".  Why would I put this in the films I am dying to see when it's been on video and DVD for years?  One reason, I have never seen it projected in 35mm.  This 1927 MASTERPIECE, directed by F.W. Murnau, as taken it's place in film history as the first film to win a Best Picture Oscar (then it was given as "Unique and Artistic Production"), and won another two for Janet Gaynor (Best Actress) and Karl Struss & Charles Rosher for Best Cinematography.  The innovative camera usage and incredible sets show how far silent cinema had come along, but it didn't have much longer to live.

Janet Gaynor "learning" German during the production of "Sunrise"
On Saturday at 11:45AM another Gaynor film (see, I told you I love her!) that I have never seen before will be screened.  "Servants' Entrance" (1934), which also stars Lew Ayres, is one of the final pictures Gaynor made at Fox studios

, the place where she gained all her fame.  Another rarely screened film.

Janet Gaynor & Lew Ayres on the set of "Servants' Entrance"

Next, we go with a couple of GEMS from the Columbia shorts department.  First up we have 1944's "Mopey Dope" with Harry Langdon (running Saturday at 4:40PM).  For YEARS this film had been on all the filmographies as a Landon/El Brendel co-starring short, but after some detective work by my buddy Rich Finnegan, we concluded that it was in fact, Langdon's final solo short for the studio.  This is also the last Columbia short released before Harry's death in December of '44.

And now, THE BEST OF ALL!!  Capitolfest is showing a never-before-seen-since-it's-original-release, El Brendel & Harry Langdon short!!  Yes, true believers in all things El, the wait is almost over!!  The short is called "Snooper Service" (scheduled to be shown on Sunday at 2:15PM) and was never released in the Screen Gems televsion package, so 16mm copies never made their way into collectors hands.  This 1945 short has been sitting in the vaults all along just waiting to be rediscovered.  Is it any good??  Who knows, who cares, it's and unseen Brendel/Langdon, how bad can it be??

Rounding out my "most wanted" to see for the weekend, is 1926's "The Johnstown Flood".  This is the film that broke Janet Gaynor into stardom, although she didn't receive the top female lead billing.  Another one I haven't seen before that will keep me in my seat!
Those are the ones that I am head-over-heels about, but there are plenty of other GREAT films that will be screened during the weekend including "The Unexpected Father" (1932) with Slim Summerville and Zasu Pitts, "Young Man of Manhattan" (1930) featuring Claudettte Colbert & Norman Foster, and Mary Eaton and Eddie Cantor in 1929's "Glorifying the American Girl".  We can also expect some great Vitaphone short subjects

to be thrown in as well as some unexpected goodies usually shown on Sunday during Jack Theakston's Short Subject Follies (Sunday, 3:45PM).  Jack usually has some AMAZING short flicks and snipes of coming attractions that are rare and sometimes, highly unusual.  PLUS, Capitolfest is the only festival that I've been to that has an outdoor BBQ cookout during the festival, and we've been informed that YES, it is happening again this year!
So, why don't you take a few days off and join me in Rome, NY at Capitolfest?  Tickets are still available AND the concession stand sells Moxie, how can ya beat that??
Posted by Louie at 2:58 PM 5 comments:

Fifi D'orsay with the emcee for the "Strictly Dishonorable" premier Freeman Lang
In 2009, I wrote 2 blog posts with a bunch of candid pictures from at least 3 different Hollywood premiers.  The only thing that held these different shots together was the repeated appearance of emcee Freeman Lang.  At the time I didn't find much info about Lang on-line, but thanks to a stroke of luck I found this article from the November 17, 1929 issue of the Boston Globe that will clue you in on Mr. Lang and his Hollywood association:

I'm baaaaaaaack!  After a few weeks away I decided to bust things out with a few candid pictures taken out on the street sometime in the 30's, 40's, or possibly the 50's?  I have no idea at all.  Readers of my blog will know that I just LOVE candid pictures of stars in unguarded moments just being themselves.  Here's a few that and if you have any information on them don't hesitate in contacting me and letting me know the era or the other people in them.  ENJOY!!

Judy Canova (in the back) and Gail Patrick

Vincent Price and wife Edith Barrett (thanks to Penfold for the ID!)
Vitaphone Cavalcade Of Musical Comedy Shorts (6 Disc)