Ah, yes.  Mid-August is nearly upon us and what a perfect time to get away for a little rest before we finally close the door on summer and slip back into winter.  But every year, for the past eight, the Capitol Theater in Rome, New York, has been making that transition MUCH easier by putting on one of the FINEST film festivals you'll ever attend.  From August 12th-14th, come to Rome for a rollicking good time.

By using the tag line, "A vacation, not a marathon", Capitolfest prides itself on a leisurely pace that doesn't leave you drained by the time you say good-bye.  Rather than a four day haul (as most festivals are), Capitolfest is three days. Although this year they've raised the bar a bit by adding about 5 more hours of films on Friday, it's not a schedule that's gonna have me falling asleep on the ride home.

But don't let my description lull you into a state of serenity as Capitolfest offers a most ferocious film line-up.  In fact, out of all the films they are showing this year, I have only seen one of them, BUT only on video and never in a theater.  And that's what this festival is all about, checking out rare films, screened in 35mm, shown with carbon-arc projectors.  Add the 1928 Capitol Theater, and it's like stepping back in time.  So, you can check out the schedule, but here are the films I'm excited about seeing:

I have to say I went a bit crazy when I found out that Janet Gaynor was chosen as the "featured star" for the 2011 festival.  As any reader of this blog knows, I am a HUGE Janet Gaynor fan!  This year, Capitolfest is serving up some rare Gaynor:

The Gaynor goods, get kicked into high gear on Friday at 8:35 by the showing of  the 1926 short "Pep of the Lazy "J".   Gaynor made a few Western shorts for Universal in the mid-'20's and this one has survived.  I don't know if the above still is from that film, but it is almost certainly from her stint at the studio. One I have been waiting to see for a long time. 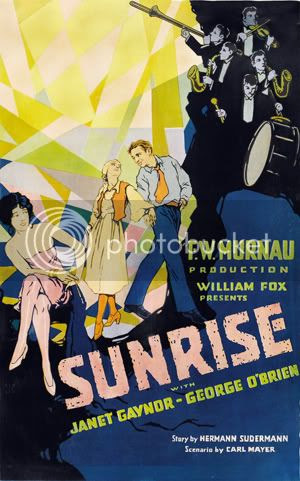 Immediately following "Pep..." we have the incredible "Sunrise: A Song of Two Humans".  Why would I put this in the films I am dying to see when it's been on video and DVD for years?  One reason, I have never seen it projected in 35mm.  This 1927 MASTERPIECE, directed by F.W. Murnau, as taken it's place in film history as the first film to win a Best Picture Oscar (then it was given as "Unique and Artistic Production"), and won another two for Janet Gaynor (Best Actress) and Karl Struss & Charles Rosher for Best Cinematography.  The innovative camera usage and incredible sets show how far silent cinema had come along, but it didn't have much longer to live.

Janet Gaynor "learning" German during the production of "Sunrise"
On Saturday at 11:45AM another Gaynor film (see, I told you I love her!) that I have never seen before will be screened.  "Servants' Entrance" (1934), which also stars Lew Ayres, is one of the final pictures Gaynor made at Fox studios

, the place where she gained all her fame.  Another rarely screened film.

Janet Gaynor & Lew Ayres on the set of "Servants' Entrance" 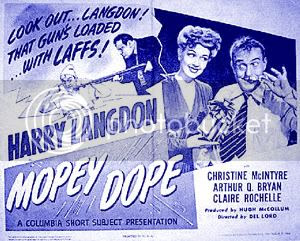 Next, we go with a couple of GEMS from the Columbia shorts department.  First up we have 1944's "Mopey Dope" with Harry Langdon (running Saturday at 4:40PM).  For YEARS this film had been on all the filmographies as a Landon/El Brendel co-starring short, but after some detective work by my buddy Rich Finnegan, we concluded that it was in fact, Langdon's final solo short for the studio.  This is also the last Columbia short released before Harry's death in December of '44.

And now, THE BEST OF ALL!!  Capitolfest is showing a never-before-seen-since-it's-original-release, El Brendel & Harry Langdon short!!  Yes, true believers in all things El, the wait is almost over!!  The short is called "Snooper Service" (scheduled to be shown on Sunday at 2:15PM) and was never released in the Screen Gems televsion package, so 16mm copies never made their way into collectors hands.  This 1945 short has been sitting in the vaults all along just waiting to be rediscovered.  Is it any good??  Who knows, who cares, it's and unseen Brendel/Langdon, how bad can it be?? 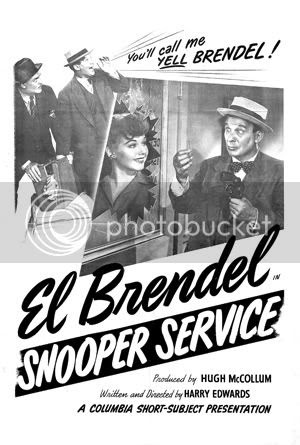 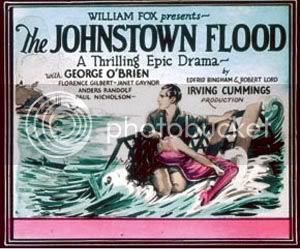 Rounding out my "most wanted" to see for the weekend, is 1926's "The Johnstown Flood".  This is the film that broke Janet Gaynor into stardom, although she didn't receive the top female lead billing.  Another one I haven't seen before that will keep me in my seat!
Those are the ones that I am head-over-heels about, but there are plenty of other GREAT films that will be screened during the weekend including "The Unexpected Father" (1932) with Slim Summerville and Zasu Pitts, "Young Man of Manhattan" (1930) featuring Claudettte Colbert & Norman Foster, and Mary Eaton and Eddie Cantor in 1929's "Glorifying the American Girl".  We can also expect some great Vitaphone short subjects

to be thrown in as well as some unexpected goodies usually shown on Sunday during Jack Theakston's Short Subject Follies (Sunday, 3:45PM).  Jack usually has some AMAZING short flicks and snipes of coming attractions that are rare and sometimes, highly unusual.  PLUS, Capitolfest is the only festival that I've been to that has an outdoor BBQ cookout during the festival, and we've been informed that YES, it is happening again this year!
So, why don't you take a few days off and join me in Rome, NY at Capitolfest?  Tickets are still available AND the concession stand sells Moxie, how can ya beat that??
Posted by Louie at 2:58 PM

Wish I could go, sounds like fun! Tell Art Pierce I said hello when you get there, Louie!

The Museum of Modern Art gave a magnificent Janet Gaynor retrospective here in Manhattan a few years ago and I haven't been the same person since, it changed my life. Now I agree with Bogdanovich that my favorite period for film is the transitional time between silents and sound. God, I feel like going to Syracuse. I love Janet Gaynor! I'm fascinated by El Brendel being the focus of this website, by the way. Many don't care for him at all, as I'm sure you know, and at MoMA, when they run the widescreen "The Big Trail" (a movie I see whenever they screen it no matter what), they precede it with an analytical slide that speaks of Brendel as "polluting" the films he was in and that many wished there was some way Brendel could be digitally removed from every movie! I swear I'm not making this up.

WOW! That's incredible. I would LOVE to see that slide.

It's amazing how that myth of El Brendel has permeated people's thinking and then when you actually ask them, "What films have you seen him in", they usually reply, "oh, just one". I don't know how you can comment on an entire film career by just seeing one film but people continue to do it.

The look on their faces (three photos up) is HILARIOUS!