I just wanted to take the opportunity to wish all my readers a very happy and healthy 2013!  I will try to post more in the coming year and share with you all the great El Brendel photos and information I have accumulated so stay tuned and thanks for hanging around!

here we have Father Time (El Brendel) being given the boot by Baby New Year (Marjorie White), circa early 30's.
Posted by Louie at 8:32 AM 1 comment:

Back from a hiatus, as I have been with my previous 2 posts, so lets have another round of Sexy Time, shall we?

Kay Strozzi and
John Halliday from the 1931 feature "Captain Applejack" (THANK YOU to Richard M. Roberts if the ID's!)

Joe E. Lewis surrounded by a bevy of babes

I originally thought this was from the 1933 feature "Flying Down
To Rio" but the code on the still tells me maybe not??

and finally, Fifi D'Orsay nearly showing us the goods in this early 30's picture

For Beckie, another still from "Okay, Jose"

Fan of the site. Beckie, asked for another photo of El in drag from the 1935 Vitaphone short "Okay, Jose".  She requested a photo of El's full costume, so here is a still: 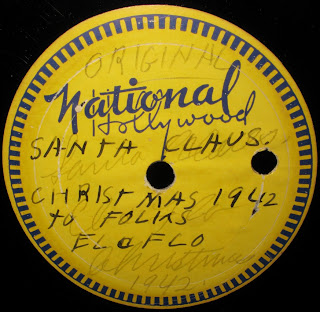 HEY! Yes, the El Brendel website is alive and well, I just haven't had a whole lot of time to post in a while as I have been going back to school! I am on break now so perhaps I can squeeze a few posts in before we start up again in mid-January.

This post is perfect for the holiday season. A couple of years ago I was able to acquire a number of recordings El Brendel and his wife Flo Bert made either at home on a recording machine or in studios where you could make your own discs. These records are fascinating as they feature El working on comedy routines which I've never heard before, Flo practicing songs (she made a number of recordings in the 20's, if you didn't know), and records of them just goofing around.

Some of these recordings are in very rough shape due to the nature of the sources. The records were recorded, or pressed, on paperboard stock and the available acetates were WELL played, so pops, clicks and some skips are evident.  It's a wonder these things survive at all.  In future posts, I'll share these with everybody. There are even a couple where El speaks in his normal voice, something he NEVER did on film!

This recording starts off with Flo singing, "Santa Claus Is Coming To Town" and El comes in as Santa. They then go into a routine where Flo plays a little girl and Santa starts questioning her about how good she's been and the dialog gets a bit racy! The recording dates from 1942 and it appears they were making a record to send back to family back East but for some reason remained in their collection in California.

Enjoy and have a very happy holiday season!