"What, No Men?" alternate/test frame discovered 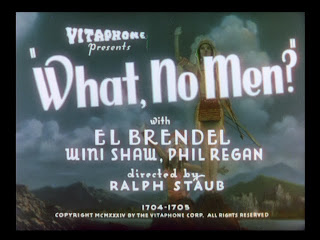 The internet is truly a great invention. Hell, we can find anything we want here from video's of cats being well........cats, to the grossest of the most sickest individuals alive on the planet. But we aren't talking about that on this blog. Nope, we are talking about film and more specifically vintage films and El Brendel. And it's nice to know that there are some people who are still concerned about finding old film, trying to identify it, and preserving it so future generations can see what we were doing way back when.

Case in point, the Nitrate Film Interest Group. They have a wonderful flickr site showing scan of all sorts of nitrate film of which 85-90% is unidentified. The site is overseen by Rachel Parker who works at the Library of Congress and you could certainly spend hours there looking at all the old film scans and trying to identify what date, studio, actors, film stock, etc., and commenting on what is your best guess is. I usually have trouble identifying anything on there until I ran across this gem, a little over a week ago:

This is certainly our boy, Mr. Brendel on the right and Wini Shaw on the left, from the 1935 Vitaphone short, "What, No Men?", one of the first shorts filmed in 3 strip Technicolor. What's noticeable right off the bat is this "head-on" shot does not appear in the short, but there is a similar scene from a different angle right near the end:

Unfortunately, this one frame is all we have of the alternate/test, the rest is gone. It's interesting to note that the Kodak edge code is on the frame and we can certainly date it as 1934 stock. Research into the short's production has shown that the film was originally supposed to be released in late 1934 but was held back from distribution due to censorship issues which had to be corrected.

I have done a bit of photoshopping and cropped the frame to show it in all it's Technicolor glory!

Happy to have you posting again.