Every March I can usually count on two things. One, that I have to get my taxes in order and two, I will have an ABSOLUTELY WONDERFUL time at Cinefest in Syracuse, New York. For the past 31 years the Syracuse Cinephile Society has been hosting what, for me, is one of the best film festivals in the world. The mix of rare films and the ability see good friends keep me coming back year after year (I think this is my 8th time making the journey!).

Although the Society has chosen to neglect the genius of El Brendel this year (darn!) they have offered up ANOTHER great series of flicks, so let’s go through some of the ones I am really looking forward to:

I had seen this a number of years ago at the Harvard Film Archive and loved it, so this time shouldn’t disappoint either.

Early sound Paramount’s usually rock so we’ll see if this one joins the ranks.

I LOVE EARLY FOX TALKIES! There is said it. Don’t know why but I can’t get enough of them. I have never seen this one and am REALLY looking forward to this!

The inclusion of Lupe Velez in the credits makes certain that my ass will be firmly attached to a seat in the screening room.

I guess this is an independent production of the Lewis Carroll classic filmed in Fort Lee, New Jersey. Should be interesting to see and compare it to Paramount’s 1933 version.

These Educational shorts are among the best of the worst and HIGHLY enjoyable. Cinefest has been running this series for a while now and just when you think the well has run dry, another comes to light. 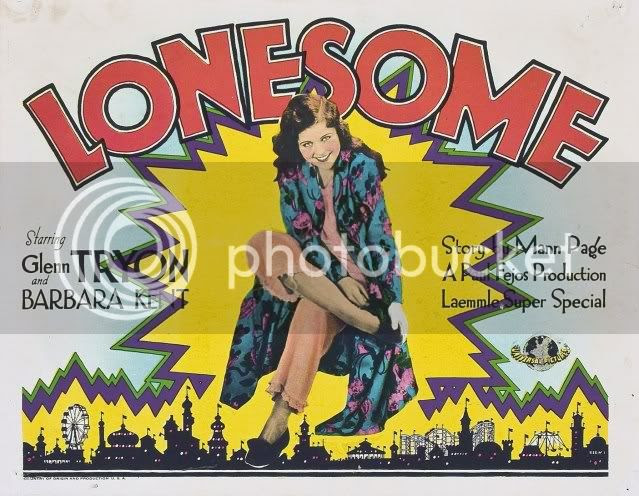 I have heard about this film for years (in fact, my bud Rich Finegan says it’s one of this top favorites of all time) and this will be a 35mm print restored by the George Eastman House. Maybe the highlight of the weekend??

THE STORY OF TEMPLE DRAKE (1933) with Miriam Hopkins

This is a film which I have always enjoyed. I've had a “collectors” copy of for years and it always looked TERRIBLE. Well, MoMA restored it and it premiered at the Turner Classic Movies Festival last year so see this clear and sharp as tack should be a revelation.

A Chaney film I haven’t seen yet, so I’m there.

See above but substitute Colleen Moore!

LESSONS IN LOVE (1921) with Constance Talmadge

I have never seen a bad film with Constance and I’m sure this one won’t disappoint either!

There are a bunch of other pictures I’ll be seeing during the 3 ½ days of movies but the above is just a sampler. Cinefest also has dealers of movie posters, stills, books, DVD’s, and just about everything else you can think of that is movie related for you to spend your dough on. If you got the time, I suggest you take the time to come out this year, it’s gonna be a GREAT time!

Fascinating mix -- I've heard of the 1931 "Alice In Wonderland" but presumed it was long lost. And seeing two of the great female silent comediennes (Colleen and Constance) should be a treat. Enjoy the Salt City, my old hometown!

There are a couple of clips from the 1931 Alice on YouTube:
http://www.youtube.com/watch?v=hfEl1sDrsH8

It looks both funny and dreadful.